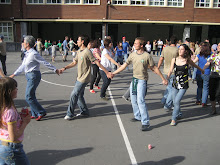 Since several years, BETI JAI ALAI group has organized in the neighbourhood various "Romerias" (casual street performances, related in the past to local religious festivities ), in order to enclose Basque floklore to citizens.

In those "Romerias" the group makes known, through musicians and dancers, different dances and traditions; and at the same time encourages the viewers to take part on it.

Every "Romeria" has been succesfully celebrated, with a big attendance and participation. Recreating this way, the atmosphere traditionally experienced in our villages.

On 2002 the group organized the first children street performance, that put together in the neighbourhood several children's group from the province of Bizkaia. Since then, that event has taken place every year in October, each time with bigger support of the groups and the spaectators.

In the performances, children from different groups make a "Pasacalles" (kind of tour, walk with music) through the streets  and make different dance exhibitions in several cornerns in the neighbourhood. At the end, they get together in a square to end the performance dancing all together.

This activity has turned out to be a very positive experience, as it allows that children from different goup shar thei experiences.